3 Monkeys at the ECAWA 2013 State Conference!

Make sure you catch up with Finley Himawan and Oscar Smith from 3 Monkeys Audio Visual and enter the prize draw at their table.

A Interactive LED panel brings great flexibility to your classroom, convention centre, lecture room, conference room or other business centre. The total cost of ownership on Interactive LED Panels are significantly lower than conventional Interactive Whiteboards due to the replacement costs associated with projector bulbs every 2,000 to 4,000 hours compared to a LED panel lifespan of approximately 100,000 hours. 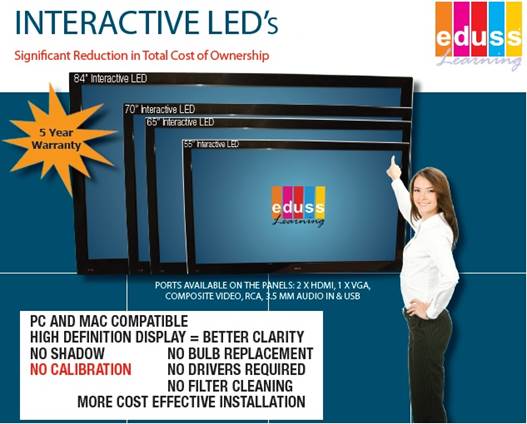 Our Interactive LED Panels are available in various sizes, ranging from 55” to 84”. All are supplied with software which provides a seamless interface with the presenter’s computer.

Easy to use, with powerful features, presenters are able to use their fingers to write directly on the panel surface or use the supplied pens or wand.

Interactive LED panels are increasingly the technology being utilized in interactive environments as they provide several benefits not available with interactive whiteboard systems.  Interactive LED panels provide a higher definition image resulting in smaller text being easier to read on LED than on a projected image. In addition to this, the back lit LED results in a brighter display and is not “washed out” by ambient light in the same way as a traditional projected image onto a whiteboard. Shadowing from projectors is also eliminated on LED displays.

Our Interactive panels have “Gesture Touch” functionality. This means that on screen content can be manipulated via a two finger touch, similar to that of an ipad / tablet device.

This also means that two or more people can now operate the system and manipulate content simultaneously.  Furthermore, Interactive LED panels can be ordered with optional built in PC module.

LED solutions do not require calibration and therefore are a simpler solution for those wanting a mobile interactive system rather than projector arms that need to be repositioned and recalibrated every time the system is moved.