Coding is FUN – come and learn with CoderDojo WA! 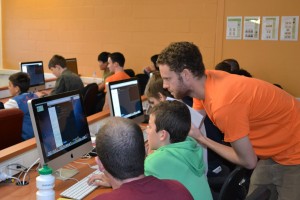 A CoderDojo is a gathering of primary and high school students, called CoderDojo Ninjas, that learn and practise computer programming in a fun environment alongside passionate mentors. The sessions offer a fun way to learn to code, with student participation being free of charge. CoderDojo Mentors are all volunteers, who encourage the Ninjas to learn using free self-learning resources freely available online.  CoderDojo’s have one rule: be cool (http://coderdojo.com/).

In June 2013, the Fogarty Foundation (http://fogartyfoundation.org.au/) established CoderDojo WA, which is the WA chapter of this movement.

This presentation will outline the journey of establishing the first CoderDojo in Western Australia.  It will share the results of the CoderDojo WA pilot held during Term 3 2013 at The University of Western Australia as well as plans for the next phase of this exciting initiative.

Join the team from CoderDojo WA at the ECAWA 2013 State Conference on Friday the 11th of October at Penrhos College.

ECAWA 2013 State Conference Registration Form (.PDF) Please note that the PDF may not display properly, with editable fields unless you open it using Adobe Acrobat or Adobe Acrobat Reader.